Adventure with an Audience

Two lifelong friends discovered a passion for wild places as students at UM. Today, they chronicle their adventures in more than 80 national parks to inspire the next generation to get outside.

He trekked through beargrass and wildflower-covered meadows and skirted turquoise glacial lakes in Glacier National Park on a hot summer day in 2010. As the trail gained in elevation, he climbed switchbacks leading up to Ptarmigan Tunnel, a 250-foot-long passageway that was carved, quite literally, out of a cirque ringing Ptarmigan Lake. On the other side of the tunnel, he arrived at an awe-inspiring view: jagged glacier-studded peaks and pristine lakes extending for miles and miles and miles.

“You instantly feel this inspiration when you take in the horizon...it’s like you have to know what else is out there,” Smith says of the moment he emerged from the tunnel.

Now, nearly a decade after that hike, Smith and fellow UM alumnus Jack Steward make a living bringing adventure inspired by America’s national parks to television audiences as hosts of “Rock the Park” on ABC.

How they got there is a combination of trails and footsteps, which intersected at UM.

Smith and Steward grew up in small, suburban communities on the western outskirts of the Twin Cities. Best friends since second grade, they started making home movies in fifth grade to pass the time. They didn’t expect their casual hobby would lead to their future: hosts of an Emmy award-winning television show that airs weekends to audiences all over the country.

Steward had just completed his freshman year at UM when he invited Smith, who’d been enrolled at Northern Michigan University, on a trip West. The mountains captivated Smith, and he fell hard and fast for Montana and Missoula. A month and a half later, he too was a Griz.

With an interest in politics from a young age, Smith decided to study political science at UM. He took one of Dr. Mehrdad Kia’s introductory-level classes on Middle Eastern culture and was immediately enthralled. He felt like he could see himself inhabiting the places Kia described. Arab language courses with UM Professor Samir Bitar, who also has a talent for storytelling, followed.

Smith says although his work with “Rock The Park” may not seem like a direct link between his bachelor’s degree in political science with an emphasis in Middle Eastern culture, he says he appreciates the degree to which politics and policy impact national parks. His education comes into play in discussions about conservation, climate change and fiscal policy – particularly since the national park system has been something of a fixture in the news cycle in recent years.

“I certainly find a way to use all of the knowledge that I acquired at [UM] for hosting a TV show,” Smith says.

For his part, Steward enrolled at UM thinking he would break out of the family mold a bit by focusing on still photography (both of his parents have longstanding careers in television). He aspired to shoot National Geographic-style documentary photographs. And he was good at it.

UM Photojournalism and Multimedia Program Director Keith Graham says Steward has a photographer’s eye, evident in his knack for composition and his ability to create a rich sense of place. “He sees as a photographer,” Graham says. “He looks to the left or right and he sees images.”

But filmmaking reeled Steward back in when he started working on an ambitious multimedia project about grizzly bears that took him into Montana’s national parks, Glacier and Yellowstone. Graham still remembers that piece. “[By then], he was no doubt very comfortable with still images. I think [working with video] pushed him,” he says.

Steward knocked it out of the park. “He should have been proud of it. It was good work,” Graham says of the project.

Steward probably didn’t know it at the time, but another transition was in store for him not long after he graduated in 2011 with a B.A. in photojournalism: moving from behind the camera to in front of it.

Steward and Smith put together a “sizzle reel” of video highlighting their explorations into Glacier, Yellowstone, Zion and Grand Canyon, thinking they might have a future as producers of such a show.

They didn’t expect that they would be asked to host it.

At first it took Steward time to let go of some of the creative aspects that he so enjoyed working behind the camera. And both Steward and Smith have had to adjust to spending extended periods of time in front of the camera.

“You really have to be comfortable coming as you are,” Steward says. “Often times we wake up and we’re like, ‘Oh, this will be seen by a million-and-a-half people and I look like – well, I look like I’ve slept in a tent for the last week.’”

They’ve learned to make light of those situations, though. “Over the years, you start looking at that [five-day backcountry shoot] and you say, ‘You know what I might do for this episode? I might wear a hat. I think that might be a good idea,’” Smith says.

Steward and Smith’s friendship, which is more like a brotherhood, lends a certain authenticity to the show. Their easy rapport is grounded by more than two decades of friendship and further strengthened by the various physical and mental challenges they’ve overcome in five seasons of hosting “Rock the Park.”

Challenges wrought by rugged topography, close encounters with wildlife and unpredictable weather form the foundation of what they find so special about remote places and their role advocating for them.

“When you’re in national parks and wild places, you’re often putting yourself out there and challenging yourself. It creates a space where you make the most incredible memories [with others],” Steward says. “We’ve grown together and we’ve had nature to usher us along to be better human beings.”

They say they’ve been encouraged by the swelling number of cause-driven millennials who are also inspired by national parks. “We need young people to enjoy these places so they in turn will want to protect them. That’s always been the mission of our show,” Steward says.

Steward and Smith have been effective in that pursuit. Two years ago they received the Robin W. Winks Award for Enhancing Public Understanding of National Parks from the National Parks Conservation Association, thereby joining the likes of Terry Tempest Williams, Ken Burns and Ted Turner.

Recent episodes have intentionally emphasized experiences of personal growth ̶ particularly those that edge into discomfort.

“We’ve had some pretty vulnerable moments the past couple of years. I think what we really want to do is show that we’re all [connected] and need each other in order to grow and progress,” Steward says. “The only way we’re advocating for that is by doing it ourselves.”

Although Steward and Smith have visited some 84 national parks, monuments, and preserves administered by the National Park Service on assignment for “Rock the Park,” they say Glacier National Park still can’t be beat.

Glacier has this ability to simultaneously humble and empower visitors, Smith says. “You always leave with this feeling of ‘Whatever I’m dealing with right now, I can overcome it. This world is so much bigger than just myself.’”

Smith says every time he’s on a plane and it starts to descend into the Treasure State, he lights up with the awe-filled excitement he first experienced a decade ago. “The University, the people, the nature – everything about Montana is home to me. [It] helped transform my life.” 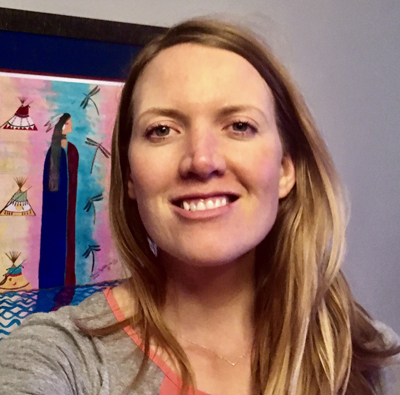 Amanda Eggert is a freelance writer and editor who lives in Bozeman with her husband and their naughty collie mix, Athena. She graduated from UM's School of Journalism in 2009.
comments powered by Disqus