With locations on campus and in downtown Missoula and its popular mobile science program, spectrum Discovery Area lets kids across Big Sky Country get their hands dirty for science.

On a chilly November night in the town of Lincoln, Mont., twelve-year-old Conner Winkler is working up a sweat.

At center court of Lincoln’s school gym, Winkler is engaged in a hotly contested battle with his friend Brett Arthur. The two seventh-graders sit hunched on opposite sides of a blue and white game board, each with a wireless transmitter strapped to his head. They are staring at each other, gripping the edges of the table—straining, grimacing—as they try to move a small, levitating blue ball using only the power of their minds.

“My brain is sweating!” declares Winkler at one point, drawing laughs from the gathered crowd.

The game is called Mindflex Duel, and it’s one of the more popular attractions on this night as Lincoln gets a visit from spectrUM Discovery Area, the University of Montana’s interactive youth science museum.

Since 2007, the museum has given Montana kids a very hands-on chance to get excited about science. SpectrUM operates permanent locations on campus and in downtown Missoula, but one of its specialties is going on the road.

That’s what we’re doing in Lincoln, where Winkler and Arthur are among about fifty students taking in spectrUM’s neuroscience exhibit. It’s one of three traveling installations the museum routinely trucks all over the state, giving kids in Montana’s far-flung rural communities the opportunity to experience science, technology, engineering, and math in brand-new ways.

“To date, we’ve worked with about half the counties in the state, and we work with almost every reservation every year,” says spectrUM Director Holly Truitt. “We’re trying to advance this next generation, to shape them and excite them about science and higher education.”

This is the museum’s third time in Lincoln and—despite the arrival of the first winter weather of the season—the turnout is a success, especially considering the school has a total enrollment of 120 students.

To one side of the Mindflex game stands a large, rainbow-colored model of the human brain, where students can familiarize themselves with its different parts. On the other side of the gym is a pop-a-shot basketball game, which invites contestants to try to sink baskets while wearing goggles that distort their vision. The goggles force their brains to adapt, and at first making the shots is nearly impossible. Once the brain makes the adjustment, however, it becomes easier.

There also is a table full of cards printed with visual puzzles, an EEG machine, and—tucked into a far corner—an exhibit where spectrUM educators stand ready to let students get up-close-and-personal with a jar full of sheep brains.

Lincoln school Principal Laurie Maughan is here with her family, checking out an exhibit where kids can strap on pairs of fuzzy ears that wiggle if you concentrate hard enough. She says it’s wonderful for the students of her small school to be exposed to science outside of a traditional classroom setting.

“This is fabulous,” Maughan says. “A lot of our kids are very tied to Lincoln and don’t get to travel a lot, so this whole experience has been great for them.”

Back at the Mindflex Duel, Winkler finally secures victory, as he succeeds in pushing the little blue ball all the way to Arthur’s side of the board. He emerges from the epic contest of wills flushed, glowing from the win, and, just maybe, pretty excited about science as well.

“It was fun making my brain move stuff. But it was hard against Brett, because he was thinking hard, too.”

“It was fun making my brain move stuff,” Winkler says. “But it was hard against Brett, because he was thinking hard, too.”

On one exposed brick wall in spectrUM’s new location in downtown Missoula, an assortment of large, mismatched letters spell out the museum’s motto: Science. Try It.

Beneath the sign is an area called the Discovery Bench—a long, green-and-white counter lined with bright yellow stools. On a Saturday afternoon a couple days after the trip to Lincoln, a group of grade school kids sit perched on the stools, bending pipe cleaners into elaborate shapes. To their left, a couple of slightly older children peer into microscopes.

“Every day we offer something different at the Discovery Bench, so it keeps the learning incredibly fresh,” says Truitt, of what she calls her favorite part of the new museum. “It also allows our college- and high school-age educators to pilot new activities, which keeps their energy up. It very much creates a community-based learning space, and I love that. I think that real magic happens at the Discovery Bench.”

That magic, of course, is science.

“It’s the fun factor,” explains museum manager Jessie Herbert. “I just learned from our neuroscience exhibit that when you’re excited your neurons are more apt to remember those experiences for longer. It sets you up better for long-term learning. So that’s what we try to do with our hands-on approach.”

Educators and employees at spectrUM often refer to the lengths they go to in order to interest kids in science as “the wow factor,” and the museum’s brand-new digs on Front Street have plenty of it.

The immaculate, 4,200-square-foot space is packed with interactive science exhibits. Near the Discovery Bench is a computerized flight simulator, which museum workers say is one of the most popular stops. There is also a water table built to model the Clark Fork River, complete with a tiny Mount Sentinel, Mount Jumbo, Main Hall, and Caras Park Pavilion. It allows kids to play in its small, moving stream but also is designed to teach them about Missoula’s unique geography.

Among other things, the museum boasts a sand-filled erosion table, numerous microscope setups, a gaggle of flatscreen monitors, and a Brain Lab, where on this day the schedule says there will be hourly dissections of sheep brains and eyes.

“I think science is best taught when you get down into it,” says Sara Feilzer, one of spectrUM’s student-educators, after she tears herself away from showing some kids an exhibit on fruit flies. “Asking questions, getting in there and really experiencing it, rather than just having someone talking to you. Getting kids thinking and asking those questions, then letting them experience it.”

Feilzer ought to know. She began volunteering at spectrUM as a high school student and now is finishing up her degree in biochemistry at UM. After drifting away from the museum for a few years, she says the opening of the new downtown location drew her back into the fold. Now she is one of the museum’s roughly twenty-five staff members.

“I love seeing new people come into the museum,” she says. “When people come in during public hours and you see the kids get these wide eyes. You’re sitting there helping them explore these things and understand them for the first time, and you know they’re going to come back.”

SpectrUM has long operated a brick-and-mortar facility inside UM’s Skaggs Building, but the recent unveiling of its downtown location has vastly increased the museum’s visibility. Truitt estimates 800 people attended its grand opening weekend in August 2013 and that during its first three months of operation about 4,500 more visited the new spot.

Enrollment in spectrUM’s membership program also is up by more than 50 percent, and attendance at its regular on-campus clubs and workshops is soaring. The downtown location gives the museum a real foothold in the Missoula community and gives spectrUM a chance to spread its pro-science message to more kids than ever, one pair of hands at a time.

“I think we feel like we built it and now the families and community are coming,” Truitt says. “It has been amazing.”

SpectrUM is the brainchild of UM chemistry Professor Charles Thompson, who was inspired nearly a decade ago to start a children’s science museum in Missoula after visiting the San Francisco Exploratorium. Truitt was there from the beginning, helping Thompson secure the museum’s original funding from the National Science Foundation’s Experimental Program to Stimulate Competitive Research [EPSCoR].

After that, she took some time away to finish her own graduate degree in UM’s Environmental Studies Program, but returned in 2005 to help the museum get off the ground on campus.

“I truly fell in love with the idea during the process of helping Chuck with the grant proposal,” Truitt says. “The more we chewed on it, the more we felt like, gosh, this is something powerful that the University can do for Montana. By the time the proposal went in, I had a pretty big crush on the whole idea of this project.”

SpectrUM’s mission is to provide a science-based point of entry into the University for community members and families. The goal shared by Truitt and Thompson was to provide kids interested in science with a “third place”—a meeting place other than home or school—to come and explore the topics that excited them. In the process, they hoped the kids would form a lifelong bond with the sciences that could one day provide them with successful careers.

“SpectrUM is in the business of inspiring the next generation of Montanans about science, technology, engineering, and math,” Truitt says. “With those same views, we want to get them jazzed about higher education, and ultimately our vision is to make it so all Montana children and their families feel connected to higher education and science.”

The vision began with the spectrUM “clubhouse” in the Skaggs Building but soon spread to its mobile science program. Truitt was inspired by the talent and technology available on UM’s campus and says the museum always felt the duty to spread those resources as far and wide as possible.

Opening the downtown location was the next obvious step and arguably the most important one in terms of providing the Missoula community with a point of access. Now that it’s open, Truitt and her staff have been swept up in the whirlwind of spreading the message and operating a full-time public museum.

They keep an eye on the future, though. At each stop on the road this year, Truitt sets up a “listening tent” where she invites locals to come in and talk with her about the science needs of their towns and to share their ideas of how to make education better for the kids in those communities.

“Our hope is that they seek higher education and possibly get dynamic careers in science and technology, math, or engineering,” Truitt says. “Really anything in higher education we’re delighted about.”

A big part of where spectrUM is headed will be to expand that mobile outreach, Truitt says. Soon the museum will need to purchase a vehicle and possibly even—the real Holy Grail—an RV with a teaching lab to haul its exhibits from town to town.

The museum itself will try to grow and expand into its physical locations in Missoula but will continue to push outward as well, spreading its message.

“Right from the beginning this was about Montana,” Truitt says. “At the end of the day we know our world is much larger than just our walls. We feel very, very proud of the work that we’ve done, but we know we can do more.” 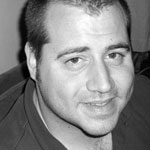 A native Montanan, Chad Dundas earned a bachelor's degree in journalism in 2002 and an M.F.A. in English-creative writing in 2006, both from UM. He works as a lead writer for BleacherReport.com and lives in Missoula with his wife and daughter.