For one UM alumna, a career in the male-dominated trucking industry took some Montana grit and a liberal arts degree.

It’s a sunny morning in late fall when Lana Richards Batts swings open the door of  Love’s Travel Stop west of Missoula. The truck stop is brand-new, but Batts walks in like a regular. She rubs her hands together and orders a tea.

If Batts feels at home here, it’s because she’s spent more than four decades invested in the lives and livelihoods of truckers. Batts says working with these hardworking, humble and honest people has been the highlight of her career.

The majority of those people are men.

According to its origins, America’s freight transport system was built by tapping the potential of “a man and a truck.” Even today 94 percent of truck drivers are men.

Batts slides into a red booth next to tall windows where she can see the big rigs pulling off Interstate 90 like blood cells from a vein. Out back, a handful of Freightliners idle in a sea of fresh asphalt. Inside, a voice comes over the intercom: “Customer No. 8, your shower is ready. Please report to shower No 7.”

But it’s also a job we all depend on, basically every time we pull out our wallets. It’s a job that gave Batts a career. Trucks are ubiquitous and indispensible. You won’t find Batts taking them for granted.

Batts grew up in Billings, where her father ran a fleet of Kenworths, shipping cattle and hogs along what is now I-90.

The oldest of three children, Batts rode horses and motorcycles in high school and was a fearless skier. She came to UM in 1965 on crutches and a broken leg from a skiing accident the previous winter. The injury caught the attention of the UM luge team, who recruited her to join the squad.

“You needed four things to join the luge team,” Batts says. “You had to be young, dumb, think you were going to live forever, and, if you were a woman, you had to be willing to forge your parent’s signature.”

Batts still remembers fielding the 6 a.m. phone call in the corridor of Corbin Hall from her concerned mother, who had calculated the miles per hour of her daughter’s descent. It sounded more like suicide than sport.

Already deft in the powers of persuasion, Batts convinced her mother to let her join her UM teammates in Grenoble, France, at the 1968 Winter Olympics.

The trip was thrilling, but a broken hand prevented Batts from competing. Frustrated, she returned to Missoula to finish her bachelor’s in history and political science. She poured herself into the debate team. Her new debate partner was a serious Air Force ROTC cadet named Joe Batts.

“This wasn’t like going down to the Wilma, holding hands,” Lana says. “With a debate partner, you’ve got to figure out how they think. We spent every waking moment together.”

Within six weeks, they were engaged. They married in August 1968, the day after Lana graduated. Joe was commissioned into the Air Force and Lana followed him to his first posting in Florida, where she earned a master’s degree in politics and public affairs at the University of Miami. Then they left for a three-year assignment in the Philippines. Lana taught American history at the University of the Philippines

By 1973, the Batts relocated to Washington, D.C., and Lana began looking for work. She quickly wearied of each potential employer’s first question: “Can you type?”

Finally, her father helped get her hired as a junior transportation analyst with the American Trucking Associations, a trucking advocacy group.

“I got in because of nepotism,” Batts says. “But I kept the job because of my liberal arts degree. I knew how to think critically, explore creatively and live ethically.”

At first, Batts was the highest paid woman and the lowest paid professional at ATA. She shared an office with a man who made 50% more than she did, with less education.

Three weeks after she was hired, the 1973 Arab oil embargo hit. Oil-producing countries in the Middle East stopped shipping oil to the U.S. due to its support of Israel during the Yom Kippur War. The truck industry was in crisis. Fuel was scarce and expensive. Lines at gas stations were blocks long. Fights broke out at gas stations. The president of ATA needed someone to manage the crisis, so Batts volunteered. “Rule No. 1,” she says: “When an opportunity presents itself, raise your hand.”

Batts immersed herself in the minutia of the oil embargo and its effect on the trucking industry. Before long she got a call from Alan Greenspan, then the chairman of the Council of Economic Advisers for President Gerald Ford. Greenspan wanted to discuss rationing diesel, a measure that would have crippled the trucking industry. Batts convinced Greenspan rationing was a bad idea, and it never happened.

The crisis quickly gave Batts visibility and credibility within the industry. Suddenly, this young woman from Montana who could outwork, outtalk and out-argue anyone was gaining momentum on an unlikely career path.

“Then,” Batts quips, “all the right people died or retired at the right time.”

Her road wasn’t always easy. Batts used vast tabletop spreadsheets to track more than 140 issues at the federal, state, local and international levels. She lobbied Congress and advocated in the media.

On top of that, she had to navigate gender biases. During a second embargo in 1979, a New York Times reporter called and asked to speak with the guy in charge of energy.

“I am the guy,” Batts replied tersely.

Eventually, she worked up to senior vice president of governmental affairs at ATA. Being the only woman in most meetings may have helped her stand out, but it wasn’t the only thing.

“People didn’t care if she was a man or woman, she was just a natural leader,” says Dan England, chairman of CR England, a trucking carrier based in Salt Lake City. “She had their respect. She was able to clear the emotions and dig down to what people really wanted and needed. She also had a special talent of really listening.”

Later, Batts became president of the Truckload Carriers Association. By the early 2000s, Batts transitioned into the for-profit sector. In 2003, she started an investment firm that specialized in the mergers and acquisitions of trucking companies. Her insider knowledge was key.

“I knew everybody,” she says. “I knew who had smart kids who could take over the business and who had dumb kids who shouldn’t even answer the phone.”

Then in 2011, Batts teamed up with a woman named Billie Lee to launch Driver iQ, a background screening company that helps trucking carriers hire reliable drivers. Another company, DAC, had a near monopoly on the market. But Batts and Lee were able to gain the confidence of major carriers and deliver fast, reliable screenings on potential hires.

It was a gutsy move, says Ellen Voie, president and CEO of a group called Women in Trucking. “That would be like starting a lemonade stand and taking on McDonalds,” she says.

When Voie started Women in Trucking, she sought out Batts’ support.

“I knew if I could get her on my board, then I’d have credibility,” Voie says. “When Lana Batts gets up and speaks, people listen.”

Voie admires the way Batts jumps in with both feet in everything she does. “I don’t believe that Lana will ever retire,” she says. “I don’t think she’s ever going to sit around and knit.”

Though Batts does plan to step down from Driver iQ soon, she’s still plenty busy. From her home in Lakeside, she volunteers with the West Shore Community Library and the Montana Audubon. She’s on the board of the Glacier National Park Conservancy, where she volunteered to help address the park’s traffic congestion. Batts brought her usual thoroughness to that effort, which identified 98 different variables with 33 million possible outcomes.

Like all Americans, Batts is seldom far from a truck. She keeps a logbook in her car to take notes. When she notices a driver doing a good job, she writes to the carrier to say so. When a trucker is driving recklessly, the carrier hears about that, too.

Once Lana’s career took off, Joe left the Air Force and started a database development company. The pair always spent their time off together.

These days the Batts spend that time traveling, birding and sailing Flathead Lake aboard their 20-foot boat, the Belfry — as in “Batts in the belfry.”

There’s just one rule on the boat.

“We’re both the captain,” Batts says. 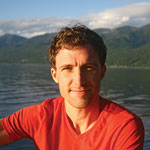